Monday, November 15th – This week the boys explore the cutest bridge yet. The Zavikon island bridge has an impressively 32 feet long span that connects the sole home on the island to an even smaller, garden-like island.

Zavikon island is located in the 1000 Islands archipelago along the St Lawrence River, which is also on the border between Ontario (Canada) and New York (United States). The archipelago has a rich history – first settled about 7,000 years ago and widely established by the Iroquois.

When our research commenced we came across a very interesting fact of the Zavikon Island Bridge – it is the world’s shortest international bridge (or at least we thought). The bridge connects the homeowner (who resides in Ontario) to their backyard island (New York).

Zavikon supposedly, as per the Daily News Hungary, translates to “Happy Tent” in a Native Canadian or Native American language. Now you’re probably wondering, why is the Daily News Hungary covering this bridge and if you have a keen attention to detail, you would also be asking why there is a Hungarian flag on the bridge alongside the United States’ and Canada’s. We have answers for your…

An entrepreneur named Elmer Andress built the german-style villa on the Canadian island in 1902. Apparently he didn’t have any backyard for his garden, so he built a footbridge to the smaller, United States island (which happens to be called Kiwa Island). As time went on this became a big story, as well as a nice tourist attraction for the 1000 islands. But with any good press comes… complications.

Tensions rose to the point where Canada placed a flag on Zavikon, and the US placed one on Kiwa (there is still a USGS survey marker on Kiwa to this day). In 1967 the American-Canadian Boundary Commission place the smaller island under Canadian jurisdiction, and relocated the border 140 meters southwest. Thus it is no longer a true international bridge. There has been a lot of hate out there on this bridge due to the fact that it’s not an international bridge, but for what it’s worth, it used to be!

Following, in 1976 the Zavikon and Kiwa were purchase by Donald Rickerd and Julie Rekai Rickerd. This power couple were pretty badass and Julie was actually from a Hungarian lineage (hopefully the dots are connecting). Julie’s mother was a Hungarian ex-pat who left Budapest in 1948 to escape the communist regime. She became famous for writing a 20 volume children’s book series which led to the North American press came to call her the “First Lady of Toronto”.

Julie’s father, Janos, was a surgeon who helped establish Canada’s first multicultural hospotial in 1957. Janos was awarded the Canadian Cross of Valour, just like his wife, as a result. Because of Julie’s Hungarian lineage, they put up the Hungarian flag on the bridge! If you missed it, scroll up to see.

With all of that said, while the boys were conducting research, they found conflicting information on what is the world’s shortest international bridge. This fierce debate in the small international bridge community brings us to El Marco bridge which connects Portugal and Spain. Oh it’s also under 10.5 feet long.

The bridge connects Arronches (Portugal) and El Marco (Spain) by crossing the Abrilongo stream. This bridge is funded by the EU and was built in 2008. The border here never really separated the villages, even before Schengen ( a zone where 26 European countries abolished their internal borders for the free/unrestricted movement of people in harmony with common rules for controlling external borders and fighting criminality by strengthening the common judicial system and police cooperation). Locals were known to use the bridge to “smuggle’ goods into the other country to barter with. When the borders were removed (via Schengen) the bridge could be official, so localities decided to add handrails and make it safer.

So there you have it, the world’s shortest international bridge… or so we thought. Andreas happen to find an article on this, which dove a bit deeper and unearthed another short international bridge 🤯. There is a bridge in the Tri-border region of the Czech Republic, Poland, and Germany, that specifically connects the CR and Poland. Thanks to howderfamily.com a follower of theirs named Scott found this bridge while walking this border: 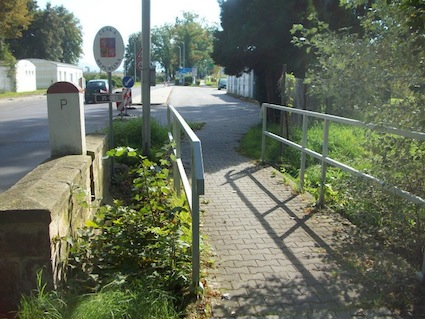 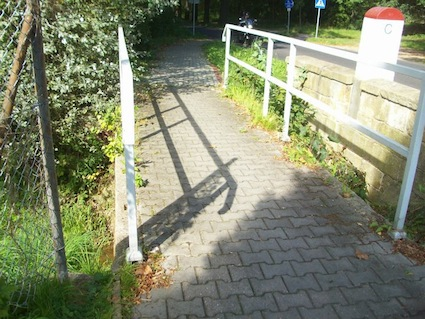 In the photo to the left you can see the “P” facing the Poland side. Behind that pillar you can see a Czech Republic coat of arms on the circular photo. In contrast the photo on the right highlights the “C” facing the Czech Republic side. Andreas did some digging on google earth and found out that this is indeed an international bridge. The question is now, how long is it!? His attempt to use the measure distance tool was inconclusive, so the jury is still out, what is the world’s shortest international bridge, El Marco or this Czech Republic/Poland footbridge?

Be sure to check out this weeks episode. If you’ve been to this are of the CR or Poland, please let us know how long this bridge is! As always, we welcome comments, questions and recommendations. Thanks again for tuning in!

3 thoughts on “The World’s Shortest (and Cutest) International Bridge”