Monday, October 25th – Each week the bridge explored has a genesis residing in some type of economic and traffic related benefit. This week however, the boys tell a different story.

Our exploration starts with the Meuse River in The Netherlands, and specifically, Rotterdam. Close to the northwestern coastline, Rotterdam is a city entrenched in the seafaring and maritime culture. It is an industrial city, with massive cranes that line the coastal horizon. Ben Van Berkel found this as inspiration when designing the Erasmus Bridge.

This bridge was named after Desiderious Erasmus Roterdamus who was a humanist and theologian throughout the 14th century. From its origin the Erasmus Bridge was unique considering the fact that it is unusual for an architect to be the main designer (van Berkel was an architect). Van Berkel reflects on his experience designing the bridge by commenting that what he “discovered from the Erasmus Bridge is that it is the human response to architecture that can change the quality of the bridge. Architecture is not about trying to create iconic images, it is about how a structure can communicate with its users.” Van Berkel continues to reflect on the bridge and its influence on the community by responding to a photograph of a sailor with the bridge tattooed on his back: “he told us that every time his ship comes back from time spent at sea, he sees the Erasmus Bridge and knows that he is home.”

The Erasmus Bridge is the first cable-stay bridge the boys have covered in the show thus far. Not only is the bridge a cable stay, it also has a bascule approach. People commonly confuse the cable stay approach for being suspension because both styles feature cables which support the weight of the deck. The chief difference is that in a suspension bridge, the tension in those main cables is anchored into the earth at either end, this creating an effect where the cables are draped over the towers. The anchorages provide the resistance to develop the tension in the cables. In a cable-stayed bridge, there are no such anchorages at either end of the bridge. Each of the cables connects a portion of the bridge deck to its associated tower, so the tower is effectively supporting the weight of the deck. Since the bridge loads are designed to have similar weights on either side fo the tower, these forces counter each other out and the tower doesn’t undergo any significant bending.

As impressive the bridge looks, the project to construct it was just as impressive – built on time and within budget! It was opened on the precise date as planned and cost 163 million euros (and was budgeted for 165 million). The two main factors for this: never lower estimates in order to aid fundraising and make accurate estimates. Another aspect that contributed to the successful project was that it was one of the first bridges designed using computers (the bridge opened in 1996). At this time, software for engineering was just becoming a thing. One of the subs-contractors on the Erasmus project developed their own software which modeled the steel and calculated the resultant forces under the various loadings. The software was also able to take this model and utilize it for programming machines to cut the steel plates perfectly.

For having the end game of creating an iconic bridge, Van Berkel and team did just that. The Erasmus Bridge has been front and center of many events. Including the Red Bull Air Race, 20210 Tour de France, and even a Formula 1 event. 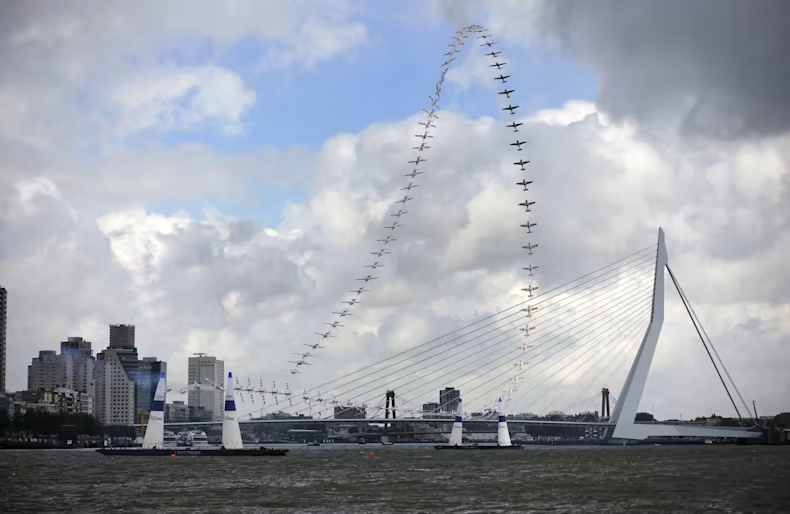 The last thing the boys wanted to leave the trolls with is a very interesting hoax. In 2015 a video surfaced and circulated the internet showing a man attempting to ride down of the cables. The video starts with the skater clinging to a cable at street level and proceeding to shimmy his way up towards the tower’s peak. It then cuts to the man at the top of the a tower. He begins to ride down one of the cables on hist skateboard and picks up a ton of speed. Pretty quickly he falls some 400 feet down into the water. The local police call it a hoax stating that the fall would have been lethal. The boys also found that according to the Federal Aviation Administration (FAA) the upper survival limits of human tolerance to impact velocity in water is about 68 miles per hour which would require a height of only about 186 feet. The filmmaker on the other hand claims the man survived. So if anyone out there knows the truth, be sure to let us know! Also here is the video:

We can’t end on a note like that however. The boys want to share the beauty of this bridge in all of its iconic photos, so check them out below. We hope everyone has enjoyed this weeks episode and if you haven’t listened yet, be sure to check it out!