Monday, October 18 – This week the boys go back in time to Chicago cerca 1908. The booming city of Chicago attributes its growth to the Chicago River. Its been an important waterway for as long as humans have lived in the area. Before humans began manipulating the river, there was a small overland portage which Native Americans used to transfer their boats from the Des Plaines River (which flowed out of the Mississippi River) and the Chicago River (which flowed out into Lake Michigan).

The narrow portage event became a major hub for shipping and the metropolis grew accordingly. In 1848, the small portage was replaced with the Illinois and Michigan Canal. What yielded was a continuous water pathway from the East Coast cities to the Mississippi River and the Midwest/Southern Cities.

Before bridges were built, the only way to cross the Chicago River was to take a ferry. We learned this week that the city of Chicago was really a mecca for bridges, our focus today is on the Chicago and North Western Railroad Bridge (or the Kinzie Street Railroad Bridge). This bridge had 5 iterations spanning 76 years.

The first iteration (and first bridge in Chicago) was built based on the core pillar of civilization… BEER. No really the first bridge over the Chicago River was built by a tavern owner in order to enable access to people on the other side.

As this bridge fell into disrepair do to lack of funding, a VERY famous William B Ogden (aka the Astor of Chicago) stepped in to change the course of Chicago history.

Ogden was never one to settle and tirelessly sought to improve and expand the reach of his railway, including a crossing on the North Branch of the Chicago River to serve Wells Street Station on the river’s east bank. This bridge was completed in 1852. Interesting enough, there are competing records of what this bridge looked like or if there were perhaps two bridges built in quick succession. Some company records indicate that a pontoon bridge was built in 1852, while other company records show tht construction of a drawbridge (costing $20,000) was in progress in 1851. Just to make the situation even more confusing an 1857 map by James T. Palmatary shows what is clearly a wooden swing bridge at this site… 🤷‍♂️

The third iteration of this bridge was the second all-steel railroad bridge in the US (1879). The first (which was built concurrently) was the Glasgow Bridge across the Missouri River. The Chicago steel railroad bridge utilized steel produced by a novel industrial method called the Bessemer Process. This process was the first developed for mass-producing steel, but it’s kinks were not fully ironed out for a few decades. The problem was that the process was so quick, that it often left steel extremely brittle… we can’t have that for constructing bridges! Thus the bridge was deemed obsolete after 8 years and would require a replacement.

The fourth bridge was built in 1898 and was a swing bridge. The boys had a tough time finding any real explanation of what this swing bridge was really about, so if you have any intel please let us know! What the team did find was that the pivot point on this swing bridge wasn’t centered on the moveable span, rather the southern truss. Again, the boys were not able to concluded what structural or mechanical advantage that provided.

What made the Chicago bridge scene so unique was that is was common for the various bridge engineers to share information and design tactics with each other. This, however, changed in the early 1900s as patented bridge designs became the norm 😢 . It’s worth noting that our boy Joseph B. Strauss was an engineer at the company who designed this swing bridge and would end up designing the final Chicago and North Western bridge.

Taking a step back however, it’s important to highlight the River and Harbor Act of 1899 which gave the Secretary of War authority to order bridges to be removed. The following year an Army Corps’ annual report identified a huge issue at the existing railroad bridge. The swing bridge required a footing element in the middle of the river where a large bottleneck for boat traffic was ever present. This was said to cause a significant impact on the economic development of Chicago. The boys were even able to pull a quote from this report:

“The North Branch is throttled near the junction at Kinzie street by three obstructive bridges.”

As a result the Chicago and North Western company received a federal mandate to remove the bridge around 1906. 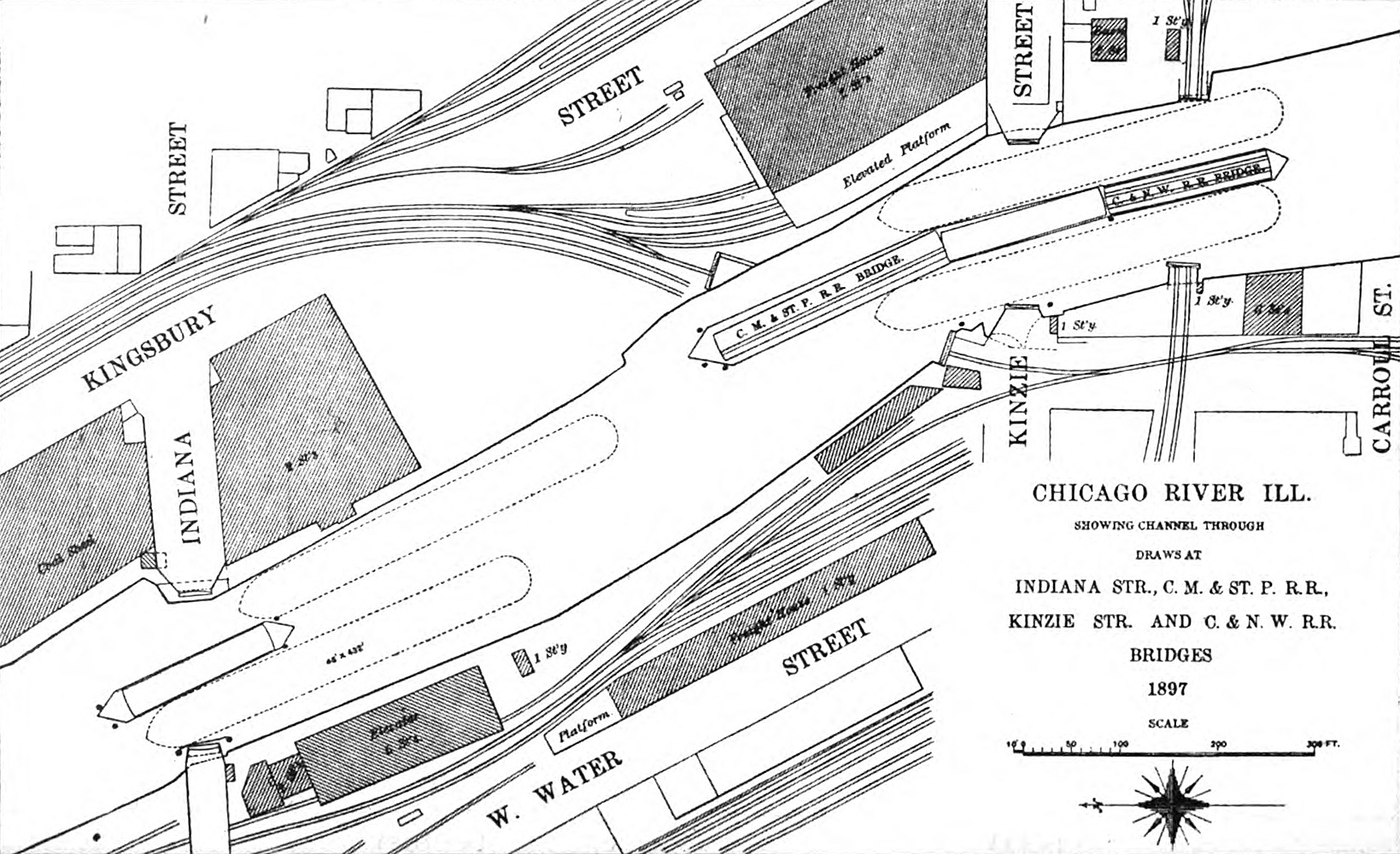 This image shows the bottleneck present at the swing bridge location

The replacement bridge (the bridge standing today) was chosen to be a Single-Leaf Strauss-Style Steel Fixed-Trunnion Bascule – which was considered the least impactful to naval and rail traffic. Mentioned above this bridge was designed by Joseph Strauss using his proprietary bascule design. At the time of its completion it was the largest and heaviest bascule span in the world.

According to the US Department of the interior the counterbalancing is near-perfect on this bridge. As a testament to that, only two 50 horsepower DC motors control the raising and lowering fo the leaf. A unique feature of the counterweight is its motion – it descends in between the arms of the upper horizontal members of the bridge: 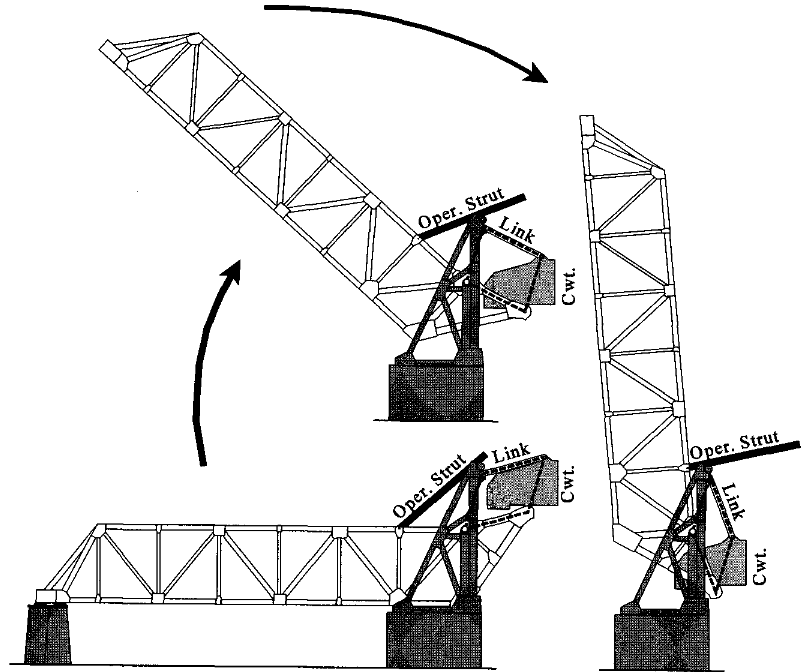 After a few years of carrying all of the passenger traffic to and from Wells Street Station, a new station was opened and this bridge was relegated to freight traffic only in June 1911. The last customer using the bridge was the Chicago Sun-Times, but they relocated their operation, so there was no need for this railway anymore. Its a bit funny that there are currently no railroad tracks on either end of the bridge, even though the bridge itself still has them, so it is about as as useless as it gets.

In order to maintain an “active status”, however, the bridge is lowered once a year. This enables Union Pacific (the owner of the bridge) to maintain their right-of-way to the river crossing (surely a business play in case they find a commercial use for that span again). Each year the Union Pacific Railroad will lower the bridge gave a company Hy-Rail truck drive across, make any necessary repairs to keep it functional, and then raise it again. The lowers are not cadenced or announced, so catching sight of it is a very rare treat for any pontist. Andreas has the great idea for the city to lean into this and make it an annual event/party for local businesses.

To end this journey throughout history the boys wanted to share that this bridge was designated by the city as a Chicago Landmark in 2007 which poses a significant barrier for demolishing it. To celebrate this historic landmark be sure to checkout this weeks episode wherever you get your podcasts!